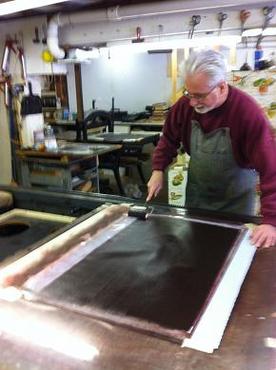 Wisconsin artist Jack Pachuta takes a non-traditional approach to his subject matter. Combining printmaking techniques with the craftsmanship of pencil and ink renderings, his works are known for their vibrant colors and unique textures.

Jack says, "An artist’s challenge is to portray the usual in unusual ways and to make people see what they might not otherwise see."
Having no formal training in art, Jack has always been able to draw. He holds a bachelor's degree in radio and television from Kent State University, then earned master's degrees from Michigan State University and the University of Southern California on the G.I. Bill, all the while pursuing art as a hobby.
In 2004, Jack found the art medium that has become the focus of his attention - printmaking. Working with Paul Yank at the Ozaukee Art Center, Jack has developed his own distinctive style and artistic perspective, as you'll see on this website.
Jack met his English wife, Renira, over breakfast "on holiday" in Portugal while they were both living and working in Germany.

They were married on Shakespeare’s birthday in 1976 and now have two daughters, and new grandson, a cat named Zoe, and a house that borders a Christmas tree farm.

A member of the Cedarburg Artists Guild, Wisconsin Visual Artists, and a past president of the League of Milwaukee Artists, Jack has lived in Cedarburg since 1979 and his works have been displayed in galleries throughout southeastern Wisconsin. He is a frequent exhibitor at art shows in the Midwest.
Jack is also a professional speaker, trainer, consultant, and the owner of Management Strategies, Inc.  Plus, he is a murder mystery writer with consulting clients and a cadre of whodunit aficionados on six continents. 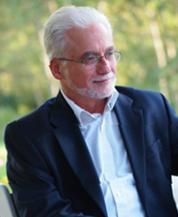